I have used a handful of machine learning models in the past. These include simple linear regression models, support vector machines (SVMs) and neural networks. While working on different projects I was mostly concerned in solving a specific application problem and did not worry about the inner workings of the models I was using. I have delved into more details of SVM during my final undergraduate project but did not have the time to do the same for neural networks.

After reading and learning about it in more detail it has come the time for me to share it. In this post I will give some brief introduction to neural nets and derive some of the maths behind a simple architecture as well as its implementation using only Numpy. I have based most of this post on Stanford’s CS231 notes which I found very useful for beginners. Some of the math derived here was not available there so it might be useful for a more interested reader.

Neural networks are organized in layers, each consisting of many units. These units are responsible for crunching the data. Each unit can receive many inputs but has a single output that can be connected to many more units in the following layer. In this study we will address a fully-connected structucture, meaning that every unit in a single layer receives input from all the units from the previous layer. To compute its output, each unit perform a weighted sum of its inputs and a bias term, then apply an activation funcion, in general non-linear, to the calculated sum. The model parameters consists of the connection weights between the units and their bias terms.

To simplify our study we are going to use a two layer network architecture (the input layer is not counted). The input layer $x$ has $N_x$ units, the hidden layer $h$ has $N_h$ and the output layer $y$ has $N_y$ units.

We could specify this architecture to perform multi-class classification, so the output layer would give the probability the sample belongs to each of the available classes. In this case we use $N_y$ as the number of classes and to enforce a probabilistic output we use an activation function called softmax on the output layer, which also guarantess that the sum of the classes probabilities sums to 1.

As for the hidden layer we can use a RELU activation function, because it is avery simple to evaluate non-linear function: $\text{RELU}(z) = \max(0, z)$. There are other reasons why we would use it, mostly to avoid a problem called vanishing gradient, but in a shallow network such as this one this would not be a problem.

Assuming we have all the ideal model parameters $W1, W2, b1, b2$, how do we get the output of the network for a given input sample? This is called forward propagation, since the data flows from the input layer, through the hidden layers and finally to the output layer as presented in the following equations.

This formulation allows the input $x$ to have many samples, each in a row, so $x \in \mathbb{R}^{n \times N_\text{features}}$, where $n$ is the number of samples in a batch, also called batch size, and $N_\text{features}$ is the number of features, or the dimension of each sample. This would yield an output $y \in \mathbb{R}^{n \times N_y}$, where each sample probability distribution among classes is given in a row.

In order to get the ideal model parameters we have to train the network on a training set. This consists of an optimization process where we try to minimize a loss function that tells how close the network output $y$ is to the real labels $\hat{y}$. At each iteration of this process we obtain new values for the parameters that will hopefully decrease the value of the loss function.

In this example, since we assumed a multi-class classification problem with a probabilistic output, the ideal loss function to use is the categorical cross-entropy function, given by $$ L_i = -\log y_{\hat{y}_i}$$

Now we have a measure to evaluate how good our classifier is doing on the training set we can try to optimize the network parameters to get the loss as close to zero as possible. We do this using an iterative algorithm called Stochastic Gradient Descent. To give a brief overview of this method, assume all network parameters are represented in a vector $\theta$. We can compute the variation of the loss function $\Delta L$ given a variation of the parameters vector $\Delta \theta$ as $$\Delta L = \Delta \theta \cdot \nabla L$$ where $\nabla L$ is the gradient of the loss with respect to the parameters $\theta$. We always want to descrease the loss, so we want $\Delta L < 0$. One way to guarantee this condition is to choose the variation of parameters as $$\Delta \theta = - \eta \nabla L$$ for a small-enough learning rate $\eta >0$, which would yield $$\Delta L = -\eta |\nabla L|^2.$$

This description is for vanilla Gradient Descent, also called batch-GD (where $L = \sum L_i$), so every sample is considered in the gradient. The stochastic part comes when you only consider a single sample at each iteration step, what reduces training time, especially on big datasets. Although it may seem attractive, this method offers slower convergence since there is a lot of zig-zagging between samples optimizations. To overcome this another variation called mini-batch GD can be used. This method lies in between batch-GD (uses one sample) and SGD (uses all samples), since it considers a mini-batch of size $N_b$ to compute the gradient, thus reducing training time and still allowing faster convergence.

Even considering our small network the loss is a rather complex function of the network parameters given all multiplications and non-linear activations. To compute its gradient $\nabla L$ we must find the derivative of $L$ with respect to all model parameters, which can be difficult to be done analytically. We then use an algorithm called Backpropagation, which is basically the use of calculus’ chain-rule. By multiplying the local derivatives from layer to layer we can numerically evaluate the derivative of the loss with respect to any parameter.

Now, to calculate the derivative of the loss with respect to the score intermediate variables we use the chain-rule as follows:

For implementation reasons we can call a vector $\text{dscore} \in \mathbb{R}^{N_y}$ where each component is the derivative of the loss regarding a component of the score variable. In a compact form: $$ \text{dscore}_j = \frac{\partial L_i}{\partial \score_j} = y_j - 1(j=\hat{y}_i)$$

We must now propagate this derivative to the parameters of the output layer. From definition we have $\score = h W2 + b2$. To improve visualization we can expand it in the form (considering a single sample batch, n=1):

In this case, the matrix of weights updates is given by

The differential parameter vector $dh$ is given by:

Finally, for the hidden layer, we can observe $dh$ as the output and $x$ as input, so by extending the equations for $dW2$ and $db2$ we have

The forward propagation is straightforward as can be seen below.

Although understanding backpropagation can be difficult, the resulting equations are somewhat simple to implement, because they only need to consider the local derivatives at each step.

Next the output layer parameters updates are calculated. Since we now have $n$ training samples, we have $L = \frac{1}{n} \sum_{i=0}^n L_i$, so dscore gets summed (the division by $n$ has already taken place in the previous step).

The hidden layer activation derivative is calculated, followed by the parameter updates.

To check the code and results, please visit this notebook. 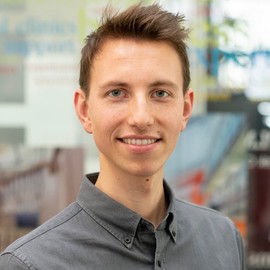 I’m a PhD candidate with the Intelligent Vehicles group at the University of Warwick. My research is focused on perception methods for autonomous driving, particularly cooperative 3D object detection.